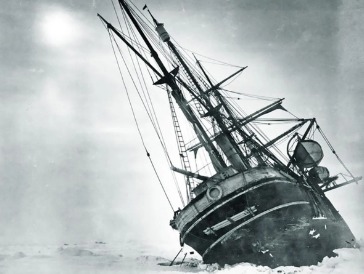 Endurance22 was the name of the team formed by world-leading marine archaeologists, engineers, technicians, and sea-ice scientists, set to find Shackleton’s lost ship in an unprecedented 35-day mission through the Antarctic sea.

They departed in February with captain Worsely’s notes and extremely specialized equipment. In fact, the Weddell Sea is composed primarily of heavy ice and permanent ice shelves, as explained on their official website https://endurance22.org/the-expedition and can only be navigated by specialist ice-strengthened ships, like S.A. Agulhas II, the South African icebreaker and polar research vessel used in this expedition.

The project had an estimated cost of $10 million and was organized and funded by The Falklands Maritime Heritage Trust (FMHT).

The searches lasted two weeks, and finally, in March, Endurance was found 3008 m under the ice of the Weddell Sea (BBC, «Endurance: Shackleton’s lost ship is found in Antarctic«) just a couple of miles south of where Worsely, the ship’s captain during the imperial Trans-Antarctic expedition predicted, per CNN.

“We have made polar history with the discovery of Endurance, and successfully completed the world’s most challenging shipwreck search.”

“We have made polar history with the discovery of Endurance, and successfully completed the world’s most challenging shipwreck search” said John Shears, expedition leader in the official statement released by The Falklands Maritime Heritage Trust in https://endurance22.org/endurance-is-found.

But who was the leader of the expedition that lead Endurance into the Weddell sea?

Sir Ernest Henry Shackleton was an Anglo-Irish Antarctic explorer. When he was 16, he joined the merchant navy and started developing a fond interest in exploration, as explained by the Royal Museum Greenwich. This is why he decided to join the Royal Geographical Society while still at sea. In 1901 he was able to take part in Captain Robert Falcon Scott’s first Antarctic expedition. He then ended up leading three of his own. Endurance, the boat found, was the one used in its imperial Trans-Antarctic expedition, which ended up being a heroic mission.

The imperial Trans-Antarctic expedition is the most important expedition of the Heroic Age of Antarctic exploration. Sir Ernest Shackleton was at the head of this journey with the goal of being the first man to land on the Antarctic continent.

The expedition began on December 5 of 1914, when the “Endurance” left Grytviken, South Georgia Island.  Two days after the Departure they started an unexpected navigation in pack ice in Weddel sea.

As they progressed toward the next destination the ice got more and more packed.

After a slow navigation, on January 18th Shackleton’s boat got trapped in the ice off Queen Maud Land’s coast.

From February to March they traveled only 153 km, but the conditions of the surrounding ice changed.
At this point Shackleton considered landing on an alternative ground.

The ice pressure was mounting all around the boat, in October the boat bent and splintered until the water below the ice started pouring into the boat.

For this reason Shackleton ordered to abandon the “Endurance” and to take the lifeboats. The entire crew started living  on ice and after a while they began to march but they also abandoned it  because of the condition of the ice. At the end  they decided to wait for the break-up of the ice . In November of . When the situation got better, they started sailing toward Elephant Island, the journey was not easy but in November 1915 they reached the island with the lifeboats. After having reached the island, Shackleton and his crew decided to split : Shackleton and five of his men went back to South Georgia island, their departure point. The crew leader took this decision because he wanted the rest of the crew to be safe. The others were rescued and taken to Chile. Once he reached South Georgia, he asked London in order to send help to rescue the rest of the crew from Elephant Island and the crew was then brought to Chile. Happily everyone survived this dangerous expedition.